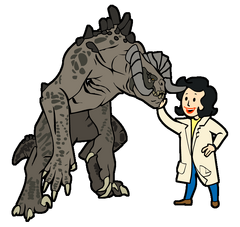 “Attract friendly creatures to the three habitats and defend them from predators.”

Event: Project Paradise is a public event in the Fallout 76 update Wild Appalachia.

The gameplay consists of multiple stages. Firstly, the party has to initialize the experiment through a terminal adjacent to ARIC-4 in the main hub. After Project Paradise has been initialized, players must head to Habitats A, B and C to harvest different types of animal food (fragrant venison, toxic sludge, and moist radkelp) and deposit them into their respective feed troughs. The more food collected and inserted into each one, the higher the level of creature which must be defended in the later stages. 0-19 for rank 0, 20-39 for rank 1, 40-59 for rank 2 and 60+ for rank 3. After the timer for filling the troughs runs out, three friendly creatures will spawn and the party has approximately 10–15 seconds to "meet the friendly creatures".

After the short break, the friendly creatures must be defended from three waves of enemy animals while hostile Arktos Pharma security robots patrol the facility. The first two waves will consist of hordes of glowing enemies, while the final wave will be lead by a powerful alpha creature. The level 100, 3-star legendary alpha predator can be either a Sheepsquatch, Grafton monster or fog crawler. Killing the alpha will complete the event. Only one friendly creature needs to survive for the event to be successfully completed. If all three friendly creatures are killed, the event will fail.

Habitat B: Collect toxic sludge by harvesting piles and by looting the mole rats that spawn immediately after. Harvesting toxic sludge deals radiation damage to the player.

Note: the Arktos Pharma backpack skin has a chance to be earned automatically after completing the event, and can be earned regardless of the number of animals remaining.

Placing venison in a food trough may cause the game to crash.[verified]

Add a photo to this gallery
Retrieved from "https://fallout.fandom.com/wiki/Project_Paradise?oldid=3497486"
Community content is available under CC-BY-SA unless otherwise noted.