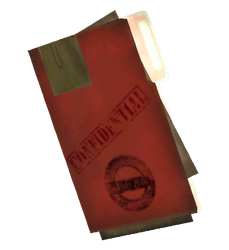 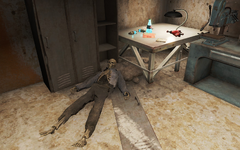 Location in the Secure beverageer lab

The Project Cobalt schematics is a schematic in the Fallout 4 add-on Nuka-World. Collecting it unlocks crafting recipes for the Nuka Quantum grenade and upgrades for the Thirst Zapper, weaponized Nuka-Cola ammo, Nuka-Cherry ammo and Nuka-Cola Quantum ammo.

The Project Cobalt schematics were the final culmination of the US army and the Nuka-Cola corporation's partnership in weaponizing their unique Strontium isotope found in Nuka-Cola Quantum. Project Cobalt was created wholly within the 'beverageer' section below Nuka-World's World of Refreshment. It was tested, finalized and printed by head researcher Rex Meacham after the bombs fell and shortly before his death from radiation poisoning. Project Cobalt's ultimate goal was to create a substance that could theoretically weaponize anything, the most notable example being the weaponized Nuka-Cola Quantum paddleball.

In the secure beverageer lab beneath the World of Refreshment, near Rex Meacham's skeletal remains, on a table. The location is accessible after restoring the park's main power in the quest Power Play or after Open Season.

Retrieved from "https://fallout.fandom.com/wiki/Project_Cobalt_schematics?oldid=3116492"
Community content is available under CC-BY-SA unless otherwise noted.