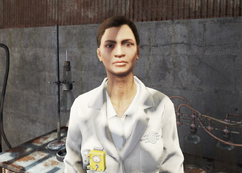 “I swear, that woman acts as though we're married.”

Professor[1] Scara is a scientist found in the Science! Center in Diamond City alongside Dr. Duff in 2287.

Scara came to Diamond City and settled in with Duff because of the access to the laboratory equipment she provided. In contrast to Dr. Duff, who is more interested in fun experiments and teaching biology lessons, Scara is a much more serious scientist, refusing to deal with visitors and referring them to Duff instead. Scara possesses a great deal of knowledge about robotics, and in addition to attempting to fix Takahashi's Japanese language subroutines, she frequently goes on field expeditions, such as one to the General Atomics Galleria, and will eagerly volunteer to work on fixing Liberty Prime if recruited for the Brotherhood of Steel.

Though she will sometimes write and speak about her in frustration, it is heavily implied that she is in a romantic relationship with her partner Duff.[2]

When brought to the Brotherhood, Scara will be much more eager than Dr. Li to work on Liberty Prime, she mentions that she will help keep the Prydwen running and that she is happy to have access to advanced technology rather than having salvage junk in the wasteland.

Professor Scara appears only in Fallout 4.

Retrieved from "https://fallout.fandom.com/wiki/Professor_Scara?oldid=3494465"
Community content is available under CC-BY-SA unless otherwise noted.