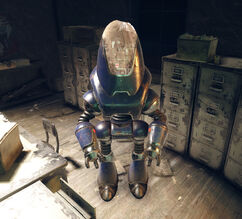 “There is one thing I need. A new graduating class. Unfortunately, your Overseer has already passed the final exam, but you. You could take it.”

Professor-bot is a Protectron at Vault-Tec University in Appalachia in 2103.

A manifestation of Appalachia's pursuit of automation, the Professor-bot was originally activated to assist the human faculty in carrying out their duties. After the Great War and activation of the vaults, the Professor-bot inherited the university and currently "runs" it. Although mandated to produce graduates, there have been no students since the Great War, and thus nobody to take the classes, much less graduate. However, the robot remains dedicated to its mission and following the rules, no matter how nonsensical they might appear. The Vault 76 overseer learns that the hard way while trying to access the VTU's restricted wing, meeting with the robot's obstinate refusal to grant a former graduate access (and also learning that the robot dissented, wanting to fail her on her overseer examination).

Professor-bot appears only in Fallout 76, introduced in the Wastelanders update.

Professor-bot and the Vault 76 overseer during Overseer, Overseen.
Add a photo to this gallery
Retrieved from "https://fallout.fandom.com/wiki/Professor-bot?oldid=3382251"
Community content is available under CC-BY-SA unless otherwise noted.