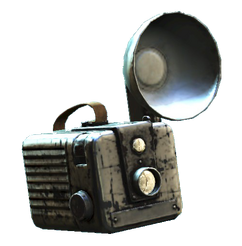 The ProSnap camera is a junk item in Fallout 4.

The ProSnap camera is a typical pre-War camera.

Although there is no character seen using one that has been found, nor can they be used by the Sole Survivor, it has not been confirmed if the camera is functional or broken. As such its only purpose when placed in a location is for decoration.

The ProSnap camera can be broken down into its individual components for use in crafting:

As with the camera, the appearance is based on the Kodak Hawkeye Brownie.

Retrieved from "https://fallout.fandom.com/wiki/ProSnap_camera?oldid=3249770"
Community content is available under CC-BY-SA unless otherwise noted.