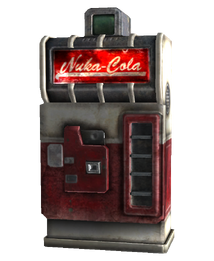 The pristine vending machine is a house improvement for your Megaton house or Tenpenny Tower suite. The "pristine" condition refers more to the fact that the machine has a functional refrigeration system after 200 years, rather than the physical condition of the machine itself, as there are many blackened areas on it.

It can be acquired from Moira Brown for your Megaton house, or Lydia Montenegro or Michael Masters for the Tenpenny Tower suite. Its base value is 500 bottle caps, 462 caps at 50 barter, 450 caps at 100 barter, and 400 if you have the Master Trader perk.

In addition to the machine, you also get eight complimentary ice cold Nuka-Colas, a Nuka-Cola bottle lamp, and a Nuka-Cola clock.

It can also be used as an extra storage device, for those who like to keep their items separated. This is the only way to obtain extra storage space in your purchased home (without buying the Vault theme, which adds an extra locker at the Tenpenny Tower suite). Nuka-Cola can be put into the machine as if it were an ordinary container to avoid turning them ice cold.

Retrieved from "https://fallout.fandom.com/wiki/Pristine_vending_machine?oldid=3131833"
Community content is available under CC-BY-SA unless otherwise noted.