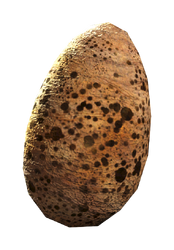 The pristine deathclaw egg is a quest item in Fallout 4.

The pristine deathclaw egg is a particularly well-formed and preserved deathclaw egg. The Gunners were contracted to deliver one to Wellingham in Diamond City, but failed in their duty. To enable its use as a consumable or ingredient, the player character must complete the Devil's Due quest.

It is required to create a tasty deathclaw omelette after the recipe has been acquired. Picking up the egg after the Devil's Due quest is completed makes it usable, but the deathclaw guarding the nest attacks.

A single pristine deathclaw egg can be found on the top floor of the Museum of Witchcraft near the entrance.

Despite being used by Wellingham to create the Deathclaw Wellingham, pristine deathclaw eggs cannot be used to supplant regular deathclaw eggs in the player character's version of the recipe.

Retrieved from "https://fallout.fandom.com/wiki/Pristine_deathclaw_egg?oldid=3182512"
Community content is available under CC-BY-SA unless otherwise noted.