“Tabitha came in today and said she's concerned about my safety. She's insisted that I change the lock on my door to require a password, using one of the other computers I fixed. I'm really starting to regret ever fixing those.”— Raul, entry 6 on his terminal

The prison building is a small building at the top of Black Mountain. It can be found in the fenced-off area near the adjacent broadcast building.

The prison building is the closest building to the Courier as they enter the radio station building area at the top of Black Mountain. Raul Tejada, a ghoul mechanic, is imprisoned in this building. The door to his room is locked and the Courier must either have a Science skill of 100 to hack the nearby terminal, a key to open the door, or they must access the second terminal near the building's entrance. Reading entry 6 on the terminal will reveal the password, which is "123456789." Once freed, Raul Tejada can be recruited as a companion.

The prison building appears only in Fallout: New Vegas. 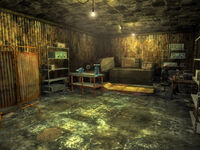