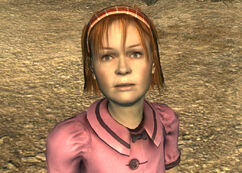 “If you don't get me a new gun next time you're topside, I'm gonna pound you so hard you'll get another inch shorter.”

Princess (real name Angela[1]) is a girl in Little Lamplight in the year 2277. She guards the back gate with an imperious manner.

Three years ago, when she was nine, Angela (who also goes by "Susie"[1]) convinced everyone that she should be the mayor of Little Lamplight. When the kids finally agreed, she immediately issued that her first act as mayor was to change the title to "Princess." This irritated young MacCready so much that he punched her in the nose only five minutes later and told everyone he was in charge from now on. Ever since then, she has had a crush on MacCready. She's been known as Princess ever since.[1]

Princess appears only in Fallout 3.

Retrieved from "https://fallout.fandom.com/wiki/Princess?oldid=3125291"
Community content is available under CC-BY-SA unless otherwise noted.