The Primm houses are a group of houses located on the southern side of Primm in the Mojave Wasteland in 2281.

Entering the houses counts as trespassing. As of the newest patch, three of the four intact houses are occupied; the house in the northwest is not. As such, the Primm residents will warn the player to leave their house, and failure to do so quickly will turn all of the residents in the house into hostiles. There is an Average locked wall safe and a skeleton in the northwest house.

The Primm houses only appear in Fallout: New Vegas. 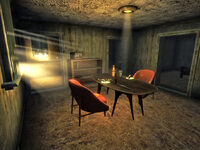 Interior of the northeast house

Interior of the northwest house