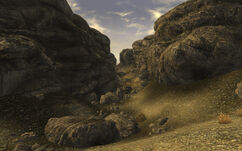 Primm Pass is a location in the Mojave Wasteland in 2281. It serves as a direct route from Primm to Novac through the mountains, to avoid traversing the Nipton area.

The western entrance to this pass is next to the emergency service railyard. It's eastern entrance is near to Harper's shack and can be accessed by heading southeast from the shack and following the terrain back to the west. There is a blind deathclaw here that will notice anyone attempting to enter the pass from either direction, even if they are sneaking. On the ground are a great number of white bones. A hollowed-out rock can also be found in the pass.

Primm Pass is based on the real world location of McCullough Pass, a pass within the McCullough Mountain Range in Clark County, Nevada.

Remains of earlier preys, the hollowed-out rock is in the center of the picture

East entrance
Add a photo to this gallery
Retrieved from "https://fallout.fandom.com/wiki/Primm_Pass?oldid=3325479"
Community content is available under CC-BY-SA unless otherwise noted.
... more about "Primm Pass"
RDF feed
Has platform
PC +