ED-E My Love
I Fought the Law
My Kind of Town
They Went That-a-Way
A Pair of Dead Desperados, I
A Team of Moronic Mercenaries
Big Winner, Vikki & Vance
Gland for Some Home Cooking

Fallout: New Vegas
“Often the first place NCR travelers stop after the Mojave Outpost, Primm is also where a lot of folks realize they left New Vegas with barely enough money to make the long trek back to The Hub.”— Fallout: New Vegas loading screens

Primm is an independent settlement in the Mojave Wasteland in 2281.

Before the Great War, Primm was a small resort town located in Clark County, Nevada, sitting alongside Interstate 15 connecting Los Angeles and Las Vegas.[1] Referred to as "budget Vegas," Primm offered tourists from California access to attractions including the Vikki and Vance Casino, dedicated to a pair of outlaws and the Bison Steve Casino and Hotel, with the Mojave's largest and most rickety rollercoaster, El Diablo.[2][3]

As the NCR expanded into the Mojave, it became a promising trade town.[4][5] Recently, prisoners from the NCR Correctional Facility broke out, putting an end to trade in the town.[6] The residents sought refuge in the Vikki & Vance Casino.[7] Samuel and Michelle Kerr cut their losses in Primm and re-established themselves at the 188 Trading Post.[8][9] The NCR's 5th Battalion watches the town from afar, lacking the numbers to reclaim the strategic location.[10][11]

The landscape of Primm is dominated by a few empty ranch homes, the rubble of the town's main streets and storefronts as well as a small NCR camp set up southwest of town. The outpost serves to prevent convicts from pushing further south to the NCR's Mojave outpost as opposed to protecting Primm, which has already fallen to the Powder Gangers.

Most of the intact buildings of Primm are in the eastern section, which is completely surrounded by a metal fence. It is possible to engage the escaped convicts through the fence, but to enter the town proper will require approaching from the western or southern ends.

When approaching the entrance to Primm, the Courier will be greeted by an NCR trooper and warned that the center of town is held by convicts. An overpass outside of the town serves as a barricade. The barricade is held on the west by a squad of NCR troopers, led by Lieutenant Hayes.

In the southeast end of town, there are four houses. Across the street from the Vikki and Vance Casino and the Bison Steve Hotel is the Nash residence, which doubles as the Mojave Express. Inside this location, one can find ED-E on the table inside of the Nash residence. Once repaired, the quest ED-E My Love begins.

Outside the Nash residence lies the remains of the fourth courier, Daniel Wyand, along with the fourth courier note. There is a campfire located southwest of the casinos, in the cluster of houses. To the northwest, behind the back wall and in front of the cliff, there is a hollowed-out rock. 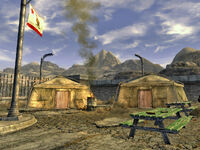 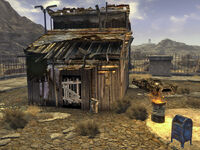 Bridge that connects the east and west side 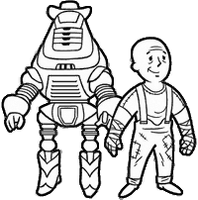