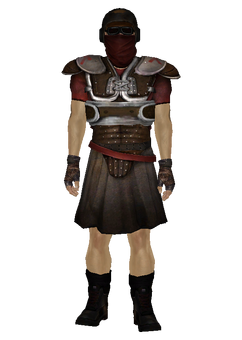 Prime legionaries are members of the Legion living in the Mojave Wasteland in 2281. They are better in terms of training and equipment than the recruit legionaries.

They can occasionally spawn with higher-level weapons such as marksman carbines but only at Hoover Dam or as part of Legionary assassin squads. They are usually found in the eastern Mojave, traveling with a squad of legionaries that may include higher-level warriors such as a veteran legionary or a decanus.

The prime legionary is based on the Roman Republic's Principes. The Principes were more experienced and better equipped than their Hastati counterparts. The Principes formed the second line of the Legion formation in battle.

Concept art, Behind the Bright Lights & Big City
Add a photo to this gallery
Retrieved from "https://fallout.fandom.com/wiki/Prime_legionary?oldid=3377227"
Community content is available under CC-BY-SA unless otherwise noted.