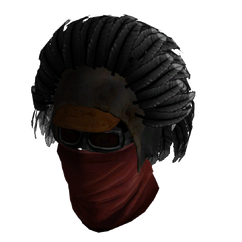 The prime decanus helmet is a piece of headwear in Fallout: New Vegas.

The prime decanus helmet is worn by Legionaries who have reached the rank of Prime decanus and are put in command of a contubernium (squad or platoon) of Prime Legionaries.

It consists of a red face wrap, black goggles, and a leather cap covered with black and gray feathers.

Though it is Legion headgear, it is not considered faction armor.