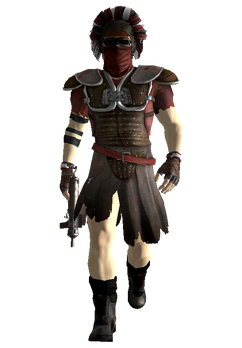 A prime decanus (plural decani) is an officer who leads a contubernia of prime legionaries and/or recruit legionaries in Caesar's Legion.

A prime decanus is essentially a squad leader, leading prime legionaries into battle against the Legion's enemies. Typically armed with a firearm scavenged from a battlefield, and a machete as backup, the Prime decanus is the backbone of the Legion infantry officers; leading those who have proven themselves into the glorious service of Caesar.

Prime decani actually have exactly the same health and skills as a veteran decanus, however their Legion prime armor armor offers slightly less protection compared to Legion veteran armor, and they are often equipped with poorer and weaker weapons compared to the veteran decanus. A notable Prime decanus is Severus, second in command at the Legion base Cottonwood Cove.

In the Ancient Roman Army, a decanus was a squad leader. In Latin, decanus means "leader of ten."

Concept art, Behind the Bright Lights & Big City
Add a photo to this gallery
Retrieved from "https://fallout.fandom.com/wiki/Prime_decanus?oldid=3307337"
Community content is available under CC-BY-SA unless otherwise noted.