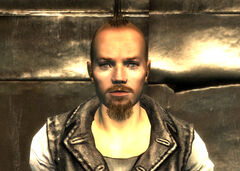 “I left the usual breadcrumbs all over some of the info terminals in this place; their computer security was a joke.”— Prime on a terminal in the Museum of Technology

Prime is found dead at Dot's Diner near the Jury Street Metro station in 2277. His eye, however, can be found in a trailer park southeast from the station, lying on a brick near a table. On his corpse, one can find the unique Xuanlong assault rifle.

Two hackers were attempting to divide some loot spoils, and Jiggs never made it out of the Museum of Technology alive, or survived long enough to solve a riddle Prime posed for him.[1]

Prime's name is a hint to how to solve the quest Jiggs' Loot. The three numbers that unlock the treasure cache are all prime numbers.

Prime appears only in Fallout 3.