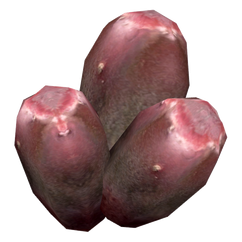 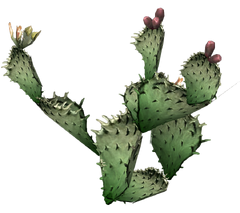 Prickly pear fruit is a consumable item in Fallout: New Vegas. It is the fruit from a prickly pear cactus.

Unlike barrel cactus fruit, prickly pear fruit is rather healthy and doesn't detract from Endurance. Two prickly pears are required to craft a bloatfly slider. Two of them can also be squeezed into an empty soda bottle to make some purified water.

The prickly pear fruit is based on the real world plant Opuntia basilaris, colloquially known as "prickly pear cactus," found in the Mojave and Anza-Borrego Deserts of the Southwest United States. The Native Americans used the plants as a food source. Similar to the in-game equivalent, the cacti are distinguished by their bright pink blooms.

Retrieved from "https://fallout.fandom.com/wiki/Prickly_pear_fruit?oldid=3316893"
Community content is available under CC-BY-SA unless otherwise noted.