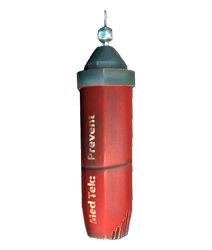 Prevent is a quest item in Fallout 4.

Not much is known about the product, although sales were projected to be +250% by 2078, and +330% in 2079.[1] Experiments on test subjects by the Med-Tek PREVENT Team reported the antidote causing hair loss, cysts in adult test subjects, and erections lasting more than 4 hours.[2]

Prevent appears to be a small, red auto-injecting syringe with a "MedTek Prevent" label.

Prevent is located in the basement of Med-Tek Research during MacCready's side quest.

Prevent is found in Long Road Ahead, where MacCready attempts to cure his son of an unnamed disease that gives its victims blue boils. What Prevent is, how it was made or what it was for is mostly unknown, as there are no terminals or backstory for it.

Retrieved from "https://fallout.fandom.com/wiki/Prevent?oldid=3124634"
Community content is available under CC-BY-SA unless otherwise noted.