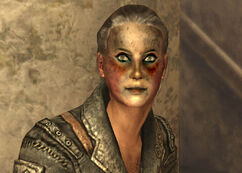 A Bit of Slap and Tickle
The Coyotes

“Welcome to the Casa Madrid. If you got an itch needs scratching, you came to the right place. Just watch how you treat the merchandise.”

Pretty Sarah is the manager of the brothel of the Casa Madrid Apartments, living in Westside in 2281.

Pretty Sarah is a female "pimp" or "madam" found in the Casa Madrid Apartments found in Westside. She manages three different prostitutes, all of whom can be found in the apartments with her; Sweetie, Maude, and Jimmy. Pretty Sarah has burn marks all over her body that she received from the Fiend, Cook-Cook, when he captured and raped her. She is a lot tougher than she looks, as she handles overly aggressive customers on a regular basis. Although she seems rude, she is very honest and loyal according to Marco, her "business partner."

Sara's burns (G.E.C.K. render)
Add an image to this gallery
Retrieved from "https://fallout.fandom.com/wiki/Pretty_Sarah?oldid=3315674"
Community content is available under CC-BY-SA unless otherwise noted.