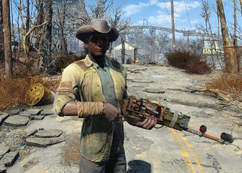 The Preston Garvey impersonator is a con artist in the Commonwealth in 2287, found during a random encounter.

"Preston Garvey" is an impersonator of Preston Garvey, a Minutemen senior officer. He will ask for 100 caps to help the Minutemen. The Sole Survivor can give him caps, refuse, say that they are the general (which may or may not be true, depending on their faction choice), or reveal that they know the real Preston Garvey. Upon realizing that his act has been seen through, his character name in V.A.T.S will change to "Preston Garvey Impersonator," and then they will run away. If the player character attacks the impersonator while he is running, he will become hostile.

The Preston Garvey impersonator appears only in Fallout 4.

Retrieved from "https://fallout.fandom.com/wiki/Preston_Garvey_impersonator?oldid=3313414"
Community content is available under CC-BY-SA unless otherwise noted.