“I have to put on a brave face as long as there were still people counting on me. That's the only reason I kept going.”

Preston Garvey originally enrolled with the Minutemen under Colonel Hollis at the age of seventeen. An avid believer in the espoused justice of the Minutemen cause, Preston rose through their ranks to become an officer under the direct command of Hollis himself.

Regrettably, as Preston states, the Minutemen settlements grew complacent. Freed from the greater concerns of the erstwhile dangers of the Commonwealth, settlements increasingly neglected their obligations to the collective in favor of petty self-interests.

In 2287, Sturges - an inhabitant of the influential trading hub at Quincy - requested the aid of the Minutemen after having heard one of Mama Murphy’s visions, which foresaw the town being surrounded and massacred (the terminal of a Quincy shopkeeper indicates that the other townsfolk saw Mama Murphy as a burnt-out drug addict; but Sturges went behind his fellow citizens to invoke the protection of the Minutemen). Preston joined Hollis on a mission to rescue Quincy, where they found the Gunners besieging it.

The Minutemen dispersed the Gunner lines and were welcomed by the battle-weary citizens of Quincy while the Gunners temporarily retreated. The Minutemen quickly moved to fortify the town, but their efforts proved insufficient as, according to a terminal in the northwestern part of the town, the Gunners reformed their lines and relentlessly probed the town's defenses for weaknesses.

The last recording in the terminal indicates that an ex-Minutemen officer named Clint revealed himself to Colonel Hollis as the leader of the invading force. Hollis notes extreme anger at this betrayal, while the terminals of the citizens express confusion and frustration. Clint sought to establish terms of surrender for Quincy and its defenders; these terms were summarily rejected by Hollis.

While the subsequent events are not explicitly recorded in text, the outcome for the Minutemen is broadly established by dialogue with Preston and various other wastelanders: the Minutemen requested support, which did not arrive; the Gunners overwhelmed the defenders and murdered nearly all of the civilians; Col. Hollis, the linchpin of the long-dwindling Minutemen cause, died fighting.

The event is known as the Quincy Massacre, and it catalyzed the disintegration of the remaining Minutemen settlements.

Consequently, Preston gathered the few remaining Quincy civilians and loyal Minutemen and fled to Jamaica Plain. However, they were eventually caught up to by Clint's Gunners, who killed some of the settlers and drove the rest from their camp. The refugees next moved to Lexington. Regrettably, as Preston testifies, Lexington was filled with feral ghouls; the hardships of the town gradually whittled the group's numbers down to just over ten. Eventually the group moved to Concord where they took shelter in the Museum of Freedom, only to find themselves under the constant predation of raiders.

By the time the Sole Survivor arrives to help Preston, he is the temporary leader of the Minutemen. His group numbers only five - a mere fraction of the original twenty who escaped Quincy under his guidance.

Preston hopes to rebuild the Minutemen with aid from the Sole Survivor. After appointing the Sole Survivor as the new General of the Minutemen, he assigns quests that slowly extend the influence of the organization by capturing new territory and defending the settlements already loyal to the cause. 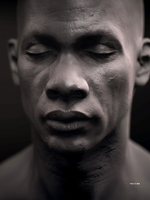 Preston's icon from the When Freedom Calls quest
Add an image to this gallery
Retrieved from "https://fallout.fandom.com/wiki/Preston_Garvey?oldid=2664457"
Community content is available under CC-BY-SA unless otherwise noted.