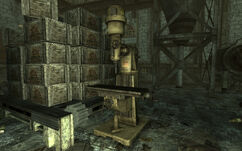 “People have been counterfeiting bottle caps forever, but it's always been small scale. A bottle cap press is a whole other threat. We can't have anyone devaluing our currency by mass producing new bottle caps.”— Alice McLafferty

Pressing Matters is a side quest in Fallout: New Vegas.

Finish You Can Depend on Me given by Alice McLafferty, then talk to her again and she will ask the player character to disable the bottle cap press in the Sunset Sarsaparilla headquarters, west of New Vegas.

Disable it and return to Alice McLafferty to complete this quest.

Retrieved from "https://fallout.fandom.com/wiki/Pressing_Matters?oldid=3208753"
Community content is available under CC-BY-SA unless otherwise noted.