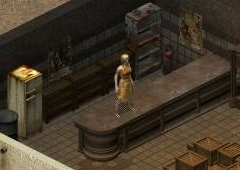 “The mayor ain't no friend of mine what with his "ghoul this" and "ghoul that." I bet he's got some ghoul blood in him, if you know what I mean. Now he wants to make me allow ghouls in my store and everybody knows that ghouls make food go bad. Can't say I'm shedding any tears over this.”

Presnell is a shopkeeper in the town of Springfield in 2197.

When the group of ghoul-haters attacked the town in the plot to kill all its ghoul citizens and overthrow the mayor, she was hiding in her shop. She has a strange accent and is known to be a ghoul-hater herself, though she never participated in any violent activities against ghouls. She also hates the mayor of Springfield.

Presnell appears only in Fallout Tactics.

Retrieved from "https://fallout.fandom.com/wiki/Presnell?oldid=3338494"
Community content is available under CC-BY-SA unless otherwise noted.