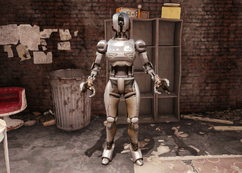 “Preliminary adjustments to statistical models complete. Commencing introduction. I was, am, and will most likely be P.A.M. Predictive Analytic Machine.”

The Predictive Analytic Machine or P.A.M. for short, is a sophisticated AI tied to a modified Assaultron unit, currently installed at the Railroad HQ in 2287.

The development of the Predictive Analytic Machine, abbreviated P.A.M., was green-lit in 2067, commissioned under the P.A.M. Initiative. This was a joint project between the Defense Intelligence Agency and the military to develop an advanced artificial intelligence program capable of accurately predicting the future, based on data fed into her systems by her human operators. In reality, the primary motive of the people working on P.A.M. was to develop her for foreseeing and stopping a nuclear war before it ever happened. She was eventually wired to a modified Assaultron body, granting her increased mobility. This made it easier for P.A.M. to be dismantled and relocated in the event of an enemy attack.[2]

Although the project had suffered numerous setbacks and other misfortunes during the duration of its course, P.A.M. ultimately succeeded in her main goal, managing to correctly predict that nuclear warheads directed towards the United States would soon be deployed. With this information at hand, the military was able to mobilize its fleet of ballistic missiles and raise the DEFCON status to the highest level in preparation for an upcoming invasion.[3] Although the Great War only lasted two hours, the nuclear exchange had silenced the majority of the larger pockets of human civilization across the globe. Due to its isolated location, the Switchboard never took a direct hit, sparing P.A.M. from the wrath of atomic fire. With her human operators now deceased, the computer's systems went into hibernation, leaving her in a dormant state for over 200 years.

It was only when the Switchboard was discovered by Railroad operatives that P.A.M. would sense the presence of another human after over two centuries of inactivity. The organization's technological experts were able to reprogram the computer to support their cause. P.A.M. would soon prove herself to be an important asset to the success of the Railroad's cause in the Commonwealth.

When the Railroad contingent stationed at the Switchboard was raided by enemy Institute synths led by coursers, having secretly been under the observation of their spies, the survivors of the attack managed to save P.A.M. from being claimed by the Institute. She was recovered from the Switchboard and relocated to the catacombs below the Old North Church fully intact, in part due to her robotic frame. P.A.M.'s advanced mathematical capabilities, processing power and large databases of information about the region ensure that operations are carried out efficiently with little to no chance of failure and that the Railroad remains protected from deadly destruction and annihilation at the hands of the Institute. Because the human race is an extremely complex set of variables, P.A.M. constantly requires herself to revise her algorithms in order to ensure accurate prediction models, especially when wild cards like the Sole Survivor come into play.

Upon collecting her for the Brotherhood, she can be found in Proctor Quinlan's room. She will have been reprogrammed to support the Brotherhood's cause.

Retrieved from "https://fallout.fandom.com/wiki/Predictive_Analytic_Machine?oldid=3408340"
Community content is available under CC-BY-SA unless otherwise noted.
... more about "Predictive Analytic Machine"
RDF feed
Has platform
PC +, Playstation 4 +  and Xbox One +