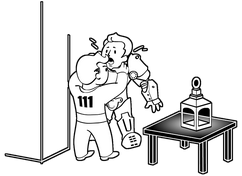 “From the inside the blimp's vulnerable. To keep that baby afloat it's got massive gasbags full of hydrogen. Your job is tricky. You got to find a way to place these explosives on the gasbags.”— Tinker Tom

Precipice of War is a Railroad main quest in Fallout 4. It is the follow-up from Underground Undercover and is part of a chain of quests, all of which are tied together, to an alternative method of completing End of the Line.

At the end of Underground Undercover, there was a warning that the Brotherhood of Steel are moving to attack Railroad HQ and The Railroad needs to be warned as soon as possible.

In fact, as soon as Desdemona is warned of the Brotherhood of Steel's impending attack, the attack begins. Defeat the Brotherhood soldiers that attack from the route leading to the escape tunnel. After they are dead, speak with Desdemona, who informs the Sole Survivor that the catacombs are the only way to escape. Glory has already gone ahead to secure passage, and Desdemona asks the player character to assist.

Entering the catacombs, Glory has been grievously wounded. Regardless of how the player character answers her, she succumbs to her wounds. Two knights— one in power armor, the other in BOS combat armor— will burst through the sealed entryway with explosives. Kill them and then continue back through the crypt, fighting initiates and knights along the way. Up on the main floor of the church, another unit of Brotherhood initiates, knights and aspirants will be waiting. They will all need to be eliminated.

Once all of the soldiers are dead, Desdemona and the others will enter from the catacombs. Grieving the loss of Glory, they note that the Brotherhood underestimated the Railroad's strength and will attack again with a much greater force, thus the Old North Church will not be safe until they are eliminated as a whole. Operation "Red Glare," the destruction of the Prydwen, is a go. To carry it out, the player character must steal a vertibird from the Cambridge Police Station. Head there immediately and rendezvous with Tinker Tom.

Outside of the station, Tom mentions that the vertibird is still on the roof and all Brotherhood personnel must be eliminated (including Haylen and Rhys). Enter the station and open fire, making sure to check every room, including the garage, which might be closed from the outside. Once they are all dead, head to the roof and kill the remaining soldiers. Tom hands over an explosive charge to affix to the tanks of hydrogen aboard the Prydwen, which will detonate and ignite the hydrogen in the envelope, bringing the airship crashing down.

While Tom preps the vertibird, an enemy vertibird will arrive and attack. Shoot it down or kill everyone aboard, then talk with Deacon to complete the quest. The quest Rockets' Red Glare will then begin.

Retrieved from "https://fallout.fandom.com/wiki/Precipice_of_War?oldid=3499940"
Community content is available under CC-BY-SA unless otherwise noted.