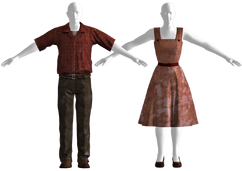 Pre-War outfits are a type of clothing found in Fallout 3.

All of these outfits are for sale from the clothing shop in Tenpenny Tower and Rivet City.

Used before the Great War, this can still be found in 2277 on characters in many locations. For males, it is a white long-sleeved shirt with a brown sweater-vest and dark pants. For females, it is a light blue short-sleeved dress with black high-heels.

Found in a suitcase on the boat underneath Arefu, or in a house in Minefield. For men, it consists of a white short-sleeved shirt and blue jeans. For women, it is a spring green sundress with a yellow ribbon waistband and yellow high-heels.

The dirty version weighs 10 lbs, which is unusually high in comparison to the 2 lbs of the clean version.

Pre-War relaxedwear is a long-sleeve blue shirt with a greenish brown sweater-vest and slacks if the player character is male. For female player characters, it is a short-sleeved light brown dress with black ribbon belt and black high-heeled shoes.

A pre-War spring outfit can be found outside Dukov's Place in a suitcase, close to the Anchorage Memorial. For males, it consists of a red plaid short-sleeved shirt and brown pants. For females, it is a pink sundress with a red ribbon belt and red high-heels.

A red baseball cap, the kind worn on those hot summer days before the Great War.

Pre-War baseball caps can be found in various locations and shops in the Capital Wasteland. Talking with Stanley at the Lone Wanderer's 10th birthday party and asking if he has any more gifts will result in a free cap. One can then be found in the Lone Wanderer's dresser at the start of Escape!. This headwear can be looted from Overseer Mack's body (if one kills Mack, and if they killed Overseer Almodovar previously) in Trouble on the Homefront.

The pre-War baseball cap is undersized when worn by children. It is anchored inside the head mesh and will clip through a child-character-model's face and forehead.

A pre-War woman's bonnet. The bonnet appears the same regardless of the gender of the wearer.

An example can be found in New Urban Apparel. If the player character is female, on her tenth birthday she might receive this item instead of the pre-War baseball cap.

The pre-War hat is similar to a modern fedora.

In total, there are around 20 of these all over the Capital Wasteland. One is worn by Mister Burke, and another is left in his house in Megaton. There is also a huge collection in wardrobes throughout Calvert Mansion in Point Lookout.

The clean version of pre-War outfits can be found in wardrobes in many locations throughout the Capital Wasteland.