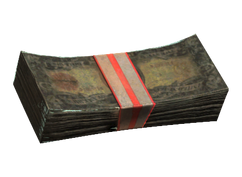 Pre-War money is a junk item in Fallout 4.

This section is transcluded from Pre-War money. To change it, please edit the transcluded page.

United States dollars (USD) were the pre-War currency of the United States of America.[1][2] Pre-War money appears as a bound stack of banknotes, and is used to represent undisclosed large sums of cash.[3][4] Although the United States and its economy were eliminated in the Great War, automated pre-War vendors continued to recognize the validity of the dollar.[5][Fallout 2d20 1] Outside of this limited usage, pre-War money is seen as worthless (in terms of currency) by people of the wasteland, though it still has value as kindling.[6]

An ancient currency, the pre-War money is not officially in use anymore as legal tender. It can either be broken down for cloth or sold to vendors. However as it has zero carry weight, it can serve as a kind of alternative currency for trading with vendors.

The pre-war money can be broken down into its individual components for use in crafting:

Pre-War money may have been based upon the $20 U.S. "Technicolor" Gold certificate, due to similarities in design.

Retrieved from "https://fallout.fandom.com/wiki/Pre-War_money_(Fallout_4)?oldid=3495343"
Community content is available under CC-BY-SA unless otherwise noted.