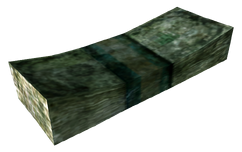 Pre-War money is a miscellaneous item in Fallout 3 and Fallout: New Vegas.

United States dollars (USD) were the pre-War currency of the United States of America.[1][2] The inflation presumably caused by the Resource Wars was severe, leaving banknotes as the primary medium of exchange. Although the Great War eliminated the United States and its economy, reducing stacks of green bills to little more than collector's items and scrap parchment, certain pre-War devices continue to recognize them as a valid currency. These are typically limited to areas like the Sierra Madre casino or the Nuka-World amusement park.[3]

Pre-War money appears as a stack of indistinguishable bills. The item is valued at ten caps per stack and is affected by the player character's Barter skill. Pre-War money is somewhat plentiful. It can be found nearly anywhere money might be found in real life, such as cash registers, safes, suitcases and desks. As it has lost almost all value to the inhabitants of the Wasteland, it can also be found in garbage cans.

The blue colored cash strap is the American Bank Association standard color for a strap containing a quantity of 100 $1 bills.

Retrieved from "https://fallout.fandom.com/wiki/Pre-War_money_(Fallout_3)?oldid=3271704"
Community content is available under CC-BY-SA unless otherwise noted.