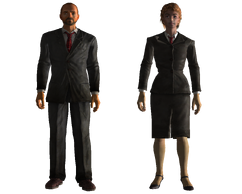 Pre-War businesswear is a type of clothing found in Fallout 3. They come in two variants, which have identical stats and can be used to repair each other.

Dirty pre-War businesswear is a light tan pinstriped suit and black tie for men, and a light tan jacket and skirt to the knees for women.

Power-suit armor is cut content from Fallout 3, appearing only in the game's files. In addition to a DR similar to light armor (+20), it also adds one point to both Agility and Charisma, with a Speech bonus of only +3, which is 2 less than regular businesswear, with a value doubled to 12 caps. 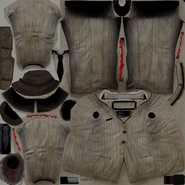 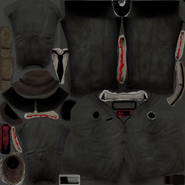