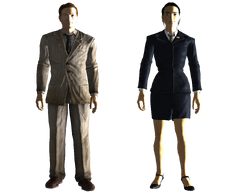 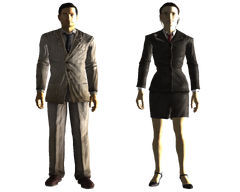 Pre-War businesswear is a type of clothing found in Fallout: New Vegas. They come in two variants, which have identical stats and can be used to repair each other.

It uses Fallout 3's dirty pre-War businesswear texture on male characters. The women's outfit has a dark gray color as seen in Fallout 3, but with a skirt that only reaches halfway to the knees.

Men wear the same outfit as in Fallout 3, while women wear a dark blue jacket and skirt that reaches only halfway to the knees.

President Kimball's suit consists of a clean dark blue suit with a white shirt and NCR flag lapel pin, and as the name implies, is worn by NCR President Aaron Kimball. This unique variant can be acquired should Kimball die during Arizona Killer, or You'll Know It When It Happens.