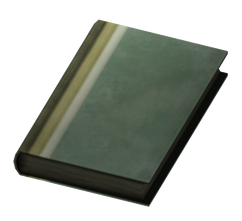 A pre-War book is a book that has not been destroyed, burned, or otherwise rendered unreadable. It is a fairly rare miscellaneous item.

Pre-War books in the Capital Wasteland come in two different versions, green and rare blue. Aside from use as Rock-It Launcher ammunition, the green books are desired by the Brotherhood of Steel. Specifically, the Brotherhood Scribe Yearling, located within the Arlington Library, who will give 10 XP and 100 bottle caps per book for contributing these to their archives.

The rare blue version (PreWarBook) does not appear in any base game locations, but it does appear 3 times in Broken Steel and once in Point Lookout.

The green version (BookGeneric01) appears 98 times in the base game, and 3 times in Point Lookout. 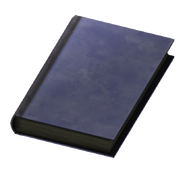 Rare blue version
Add an image to this gallery

Retrieved from "https://fallout.fandom.com/wiki/Pre-War_book_(Fallout_3)?oldid=3136115"
Community content is available under CC-BY-SA unless otherwise noted.