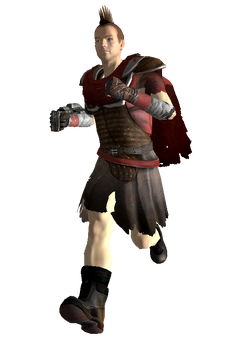 The Praetorian guard are the elite personal bodyguards of the main leaders of Caesar's Legion, as seen with both Caesar and Legate Lanius in 2281. Headed by Lucius, Praetorians focus almost exclusively on unarmed combat in battle, and can see through disguises.

Caesar explains that his Praetorians are hand-picked from among the ranks of those Legionaries who have served for long enough and have killed enough men to qualify as centurions. Those invited to join the Praetorians must pick a current member of the Praetorian guard whom they believe is the weakest, and challenge them to an unarmed duel to the death, where, should they win, will take on the mantel. The leader of the Praetorian guard can also be challenged, but this does not currently happen often, as Lucius is highly respected among his subordinates.

Personifying Caesar's martial philosophy, the Praetorians usually fight using only unarmed combat, in which Lucius will explain that weapons or firearms may break or jam, but a true warrior can always rely on his innate skills. Regardless, Praetorians still wear ballistic fists to give their punches a devastating impact beyond what a normal human blow can inflict. The only instances of Praetorians using firearms is if they are part of a legionary assassin kill team, in which case they will either use a trail carbine or a 12.7mm submachine gun.

Can be found guarding Caesar's tent, and the weather monitoring station at Fortification Hill, with several of them also fighting alongside Legate Lanius in the final showdown. At least one Praetorian will fight along with an assassination team to kill the Courier should they be disliked enough by the Legion.

The Praetorian guard appear only in Fallout: New Vegas.

Concept art, Behind the Bright Lights & Big City
Add a photo to this gallery
Retrieved from "https://fallout.fandom.com/wiki/Praetorian_guard?oldid=3354711"
Community content is available under CC-BY-SA unless otherwise noted.