003E4E89
“Poseidon Energy Plant WV-06 has failed. Repair its systems and get the power back on.”

Event: Powering Up[1] is an event quest in Fallout 76. It takes place at either the Monongah Power Plant, Poseidon Energy Plant WV-06, or Thunder Mountain Power Plant.

The event is triggered upon approaching any of the three locations, unless it is already active in another location. The event's one hour timer starts as soon as it is started and is the same for all Vault Dwellers. Enemies may vary per location, possible hostiles include Scorched, mole miners, feral ghouls and mongrels.

The event involves making basic repairs (50%) to the cooling, generator, and reactor systems of any given power plant. Optionally, each system can be fully repaired, which results in additional experience, caps, and twenty percent more items received upon completion of the event.

Inside each power plant, there are magnetically sealed doors, which can only be unlocked via terminals in order to access rooms like the reactor chamber or plant control room. As the terminals are locked by default, it may be neccessary to utilize perks (Hacker, Expert Hacker, Master Hacker, or Master Infiltrator) in order to get access to all places. The reactor chamber in each power plant is highly irradiated, precautionary measures in form of equipment (Hazmat suit) or aid items (Rad-X and RadAway) may be necessary.

The cooling system is located in the gray cooling towers outside of each power plant, which can be accessed either by metal catwalks from underneath them, or from inside the power plant. The repair process involves fixing bursted pipes, which are distinctively marked with yellow and black warning stripes. They also emit steam, which creates an audible hissing noise. After the completion the basic repairs, any missing leaks will appear on the Pip-Boy's compass and can be fixed for an improved reward.

The generator system is always located at the "turbine hall" inside a power plant. Fixing it involves interacting with large yellow control consoles, which throw sparks and emit an electric sound while they are in their broken state. After repairing a certain amount of them, the basic repairs are done. As with the cooling system, any missing consoles will be marked on the compass and can be repaired to fully restore the system.

The reactor system is always located at the "reactor chamber" inside a power plant. Repairing it combines the tasks of both previous systems, as both bursted pipes and damaged control consoles need to be interacted with, all while receiving constant radiation damage inside the chamber. Access to this room is restricted by terminal-locked doors, and decontamination showers for radiation removal are found outside it. Like the previous systems, basic repairs are considered complete once a certain number of pipes and consoles are fixed, with additional repairs being possible to fully repair the system.

Once all systems are either partially or fully repaired, the power plant can be re-started by using the terminal inside the control room of the plant. Doing so completes the event and restores power for several hours to the region the power plant is located in. This supplies 400 units of power to power boxes at the plant's workshop and 100 units of power to power boxes at substations, locations, and workshops in the region. 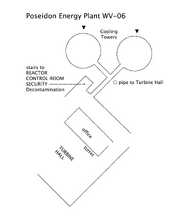