The power fist is a weapon in Fallout 4.

A more bare-bones design than other iterations, the power fists found in the Commonwealth were originally used as pre-War hardware for demolition crews rather than as weapons.[Non-game 1] However, like the previous designs, the power fist also uses a pneumatic battering ram to deliver powerful, medium-speed punches to attackers, releasing a puff of steam and sparks with each punch. Its power attack is a heavy underhanded thrust. 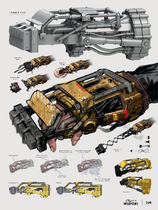