The power armor station is a constructible settlement object, world object and crafting station in Fallout 4.

A power armor frame that comes in two styles. The first is a box frame with two long metal legs, which extend up the rear to support two overhead bars, which can be adjusted in height by two hydraulic pistons. The second is a two-piece unit, comprising of two struts with a wide base, as seen on the Prydwen among other locations in the Commonwealth. Only the former style of the two can be built in a player-owned settlement. The Sole Survivor can use the station to attach, detach and repair armor mods when a power armor frame is installed at the station.

With the Local Leader rank 2 and the Armorer rank 1 perks, the player character can build power armor stations within settlements.

These are available to the player character when they are allied with the settlement. Using them draws on the inventory of the settlement workshop.

These are available to the player character at any time. Using these stations draws on one's inventory and what may be stored in the station itself.

A power armor station as seen in the Fallout 4 trailer

Two of the four stations aboard The Prydwen 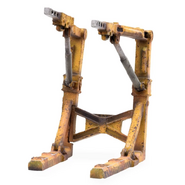