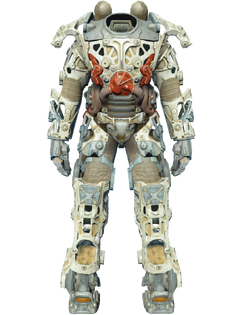 “Even without any pieces, a power armor frame provides a variety of advantages, like increased carry weight, greater melee damage and the elimination of falling damage.”— Fallout 4 loading screens

The power armor frame is the basic exoskeleton unit required for all power armor models in Fallout 4.

The West Tek internalized servo system is the standard chassis for all power armor series. Powered by a back-mounted TX-28 micro-fusion pack generating 60,000 Watts of energy,[Non-canon 1] the HiFlo hydraulics inside the frame increase the operator's strength and carrying capacity.[1] More importantly, it boasts a standard fusion core interface allowing them to be powered from any core found in the wasteland.[2]

The basis for all power armor suits, one can't wear power armor without stepping into the frame. Even without any pieces, a Power Armor frame provides a variety of advantages, like increased carry weight, greater melee damage and the elimination of falling damage.[3][4]

Any combination of power armor parts can be equipped on a power armor frame, which is a furniture object that does not exist in the inventory. A power armor station can be used to modify power armor components on a frame. Although the weight of worn apparel and armor is not ignored, any power armor segments attached to the frame are considered weightless.

The base frame provides 60 Damage Resistance, and Energy Resistance, but negates the effects of other apparel and armor worn underneath. It also sets the base Strength to 11, which can result in negative effects on carrying capacity.

When purchased from a vendor, the frame will spawn in the power armor station in the shop. The only exception is when purchasing from Atom Cats, which will appear outside garage.

Frames that are empty, particularly those purchased from vendors, are also immune to the "Cell Reset" bug which can cause the loss of mounted power armor pieces on unattended power armor.

A special frame is worn by Proctor Ingram aboard the Prydwen, to represent her injuries and the use of power armor as, effectively, a prosthetic. She cannot be forced to exit the frame as she has a locked fusion core.

Empty frames can be purchased from the following locations:

An opened power armor frame seen in a loading screen

Back of the frame

The frame at the Revere satellite array