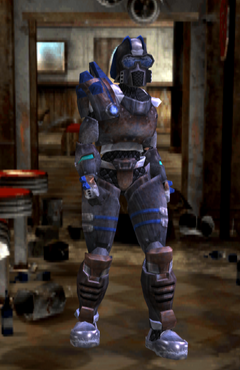 Power armor in Fallout: Brotherhood of Steel is not like the power armor used by the Brotherhood of Steel, Enclave, or American military forces before the Great War. It does resemble the T-51b power armor a bit, however. The origin of this armor was an attempt by Vault-Tec to produce combat equipment to help their own Secret Vault to successfully enter the post-apocalyptic world.

Vault-Tec had access to the vast knowledge of the government and the companies working for them, and tried to use all the technologies they could gain access to before the Great War happened. Having no option to manufacture or buy T-51b power armor in large amounts, they started their own research and produced something at least similar to the original design(s).