Fallout 4
“Noodles. We all eat them. We all love them. And Diamond City's Power Noodles has supplied this sustenance for the past fifteen years. From the stilted mechanical cadence of Takahashi's programmed Japanese, to the fragrant steam that wafts from each bowl, to the scalding tang of each delicious mouthful - the ordering and eating of noodles is but one of many shared human experiences. Or is it?”— The Synthetic Truth

Power Noodles is an unmarked location in the Diamond City market in 2287. It is operated by the Protectron Takahashi, and was founded in 2272.[1] Takahashi sells noodles for 55 caps per bowl.

This structure directly opposite the city's main entrance in the center of the market is a small outdoor restaurant. Counters encircle a central pillar, with Takahashi behind one of them. A cooking station sits nearby. The pillar features a functional power reactor, supplying the surrounding buildings with electricity.[2]

Two Nuka-Cola Quantums - On the counters.

Power Noodles only appears in Fallout 4. 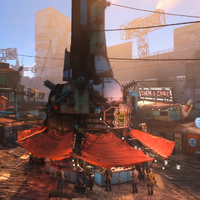 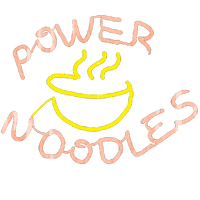