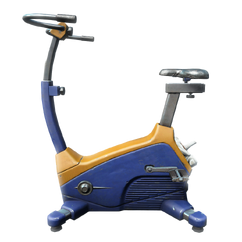 Power to the People

“Settlers stay fit and generate power at the same time.”

Assigning a settler to the Power Cycle 1000 will generate 2-4 power for the settlement. The amount of power generated and the crafting requirements for this item depend on the choices made during the Power to the People quest. All three versions improve the Sole Survivor's Endurance by 1 after use. This effect lasts until a different exercise equipment item is used.

There are 4 variants of the Power Cycle:

The prototype and peaceful parameters variants can be crafted as follows:

The shock parameters variant can be crafted as follows:

The prototype is located in the Special section of the workshop crafting menu during Power to the People. Once the quest is finished, the Power Cycle 1000 is located under Resources → Vault.

Setting the shock or buffout parameters, along with Mood Enhancer or Appetite Suppressant for the soda fountain or Subliminal Messaging or Vault Monitoring for the phoropter will cause the first settler that joined the player character's vault to leave in protest.

Retrieved from "https://fallout.fandom.com/wiki/Power_Cycle_1000?oldid=2954245"
Community content is available under CC-BY-SA unless otherwise noted.