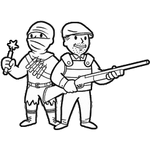 “I have a present for you from the Powder Gangers. I hope you like dynamite.”

The Powder Gangers (also referred to as Powder Gangsters by Johnson Nash) are a gang of escaped prisoners acting as raiders operating in the Mojave Wasteland in 2281.

In the distant past, the NCR Correctional Facility was the Jean Conservancy, a low-security all-female prison.[1] When the NCR occupied the Mojave, it was commandeered to house prisoners on a work-release program.[2][3] The inmates were tasked with maintaining a railroad alongside the Long 15 under military supervision, keeping the vital link between the Boneyard and New Vegas alive.[1]

However, as the war with the Legion escalated, more and more prison guards were redeployed to the Colorado River against the warden's objections. This provided an opportunity that the inmates seized to stage a prison break.[1][4]

Under the leadership of Samuel Cooke, a small group of inmates gathered weapons and explosives before rebelling against the NCR staffing the facility.[3][5] Blasting their way out of the cellblock, they quickly overwhelmed what little NCR personnel were present at the site, killed the warden and established their own rule.[6] The prisoner population dispersed, with some following Cooke into Vault 19, others staying with Eddie as Powder Gangers and some heading out to cause mayhem along the I-15.[4][1]

The revolt shut down Highway 93 and the NCR's main road to Vegas. The situation worsened when the Powder Gangers stole Sloan's dynamite supply, shutting down Quarry Junction and inadvertently unleashing deathclaws on the quarry and the highway.[7] Eventually, the gangers established a sizable presence outside the prison, with a ring of camps around it, focused on raiding caravans that tried to push through to Vegas and launch attacks to terrorize the local towns of Goodsprings, Sloan and Primm.[8][9]

There are several groups of loosely organized Powder Gangers that organized quickly after the prison break. Many remain in the prison and have been raiding surrounding areas under the leadership of Eddie. There are factions of Powder Gangers spread far along the southwestern part of the Mojave Wasteland, all the way down towards Nipton.[10]

The smaller groups of Powder Gangers are all lead by a strong or cunning underboss, like Joe Cobb. A large contingent of Powder Gangers can be found in Vault 19, under the leadership of Samuel Cooke, although there they are identified as escaped convicts.

Due to their hostility, the Powder Gangers have little to no friendly relations with outside groups. They are hated by both the NCR, whom they were former prisoners of, and Caesar's Legion, due to their harassment of Legion raiding parties.[11] The Brotherhood of Steel dislike them due to interfering with patrols near and in Hidden Valley.[citation needed]

The group engaged in commerce with establishments in Nipton. However, even in Nipton before the massacre, the group visited opposite the NCR, the troopers at night, and gang members during the day, to avoid conflict.[12] The Vault 19 group plan to join the Great Khans, at the behest of their leader, Samuel Cooke, indicating some level of respect is held for the Khans.[13][14][15]

The favored and most common weapons among the Powder Gangers are explosives, primarily the powder charges and dynamite which they acquired during their time in prison and escape. However, they also have a large arsenal of guns; some stolen, others looted from dead NCRCF guards. They carry single shotguns, 9mm pistols, varmint rifles and .357 Magnum revolvers. However some members who have moved further away from the prison, such as those found at Whittaker farmstead, are significantly better armed, sometimes equipped with laser or plasma rifles.