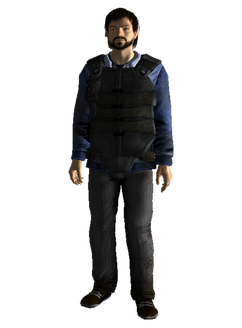 Ghost Town Gunfight
Run Goodsprings Run
I Fought the Law
Why Can't We Be Friends?

The Powder Gangers were prisoners brought into Nevada by the NCR to rebuild the railroads. Housed in the NCR Correctional Facility, the prisoners were subjected to extremely harsh discipline, leading some to plan a revolt. Having been supplied with dynamite for the purposes of breaking up rocks on the railroad, a small number of prisoners proceeded to sneak small portions back into their cells and used it to start a prison riot. The revolt was successful and the prisoners took over the facility, killing most of the former guards. Since then, they have set up numerous camps that shakedown or kill unsuspecting passers-by. They have taken to calling themselves "Powder Gangers", in reference to the explosives they use as weapons.

Ringo, a caravan trader, once escaped an attack by Powder Gangers, killing three of their men in the process. He then beat a hasty retreat to Goodsprings to escape their overwhelming numbers. Trudy let him take shelter at an abandoned gas station in the town. The Ganger Joe Cobb followed him to Goodsprings but has not been successful in finding his hideout. While Ringo is not afraid to face the Powder Gangers again, he knows that he needs some support to ensure success. There are two options for the Courier to choose from: help the Powder Gangers take over Goodsprings or get the town together and fight off the invaders.

Powder Gangers are glorified raiders. Their defense is rather weak, unless the Ganger in question is fortunate enough to be wearing the somewhat more uncommon Powder Gang guard armor, which possesses a bulletproof vest and is superior to many early-game forms of armor (most notably the raider armor favored by Fiends). Their offense is similarly unremarkable, as most of them are armed with fairly low-level weapons. The noteworthy parts of combat with Powder Gangers are two-fold: 1) their extensive use of gunpowder weapons (such as dynamite and powder charges); and 2) their tendency to appear in sizable groups. The Powder Gangers are likely to be the first organized and armed group that the player encounters.

Powder Gangers are easily dealt with by most weapons and are especially vulnerable to explosives and hollow-point rounds. Early-game players are advised to avoid using these rounds on ones with guard armor early on, however, as the damage reduction from the target's armor will often eclipse and outperform the damage bonus the ammunition type gives to early guns. Late-game weapons, however, can cheerfully ignore this drawback.

Gangers at Vault 19 and the NCR Correctional Facility are better equipped. Most of the personnel at these sites will have the aforementioned guard armor and will be positioned better with better weapons. Expect guard-tower snipers armed with varmint rifles and the errant cowboy repeater or hunting rifle. Grunts in these places are more likely to carry guns like the .357 Magnum revolver, 9mm SMG, and 10mm SMG, while melee combatants are more likely to trade-up their knives and tire iron for the likes of machetes and combat knives. Commanders and bodyguard units will be even better-armed, packing plasma pistols and rippers.

The Powder Gangers appear only in Fallout: New Vegas. They were originally going to appear in Van Buren, the canceled Fallout 3 project by Black Isle Studios.

Retrieved from "https://fallout.fandom.com/wiki/Powder_Ganger?oldid=3270323"
Community content is available under CC-BY-SA unless otherwise noted.