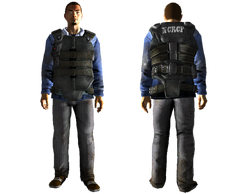 The Powder Gang guard armor is a piece of armor in Fallout: New Vegas.

This uniform belonged to the guards stationed at the NCR Correctional Facility before the convicts, later named Powder Gangers, killed them and commandeered it for their own use.

Powder Gang guard armor is almost identical to all forms of security armor except it has "NCRCF" written on the back shoulder strap. It is the basic Powder Ganger outfit, however, it has what appears to be an extra chest piece and groin guard over it. It offers a Damage Threshold of 5, can be repaired with other Powder Gang guard armor, and acts as a Powder Ganger disguise. Some non-player characters such as guards can see through disguises and will attack the player character if they are not on good terms with the faction.

Several characters are outfitted with the armor, including:

This armor is the Pip-Boy icon of all the Powder Gangers armor.