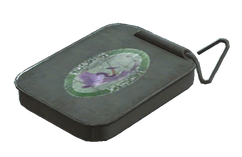 Potted meat is a consumable item in Fallout 4.

Potted meat, or Longneck Lukowski's canned meat, is made by Theodore Collins. At first he planned on using meat bought from traders, but when the first trader delivered too early, the meat that was delivered became spoiled. Theodore came up with the idea to mix it with mole rat meat and did. He had a high demand for the product and traders were not able to quickly deliver him new meat. So, Theodore started using more and more mole rat meat until he couldn't keep up with the demand.[1] He decided to use the meat of other wasteland creatures, including mongrels, radroaches, radstag, yao guai, brahmin, bloodbugs and eventually feral ghouls, including a glowing one.[2][Non-game 1]

Eating irradiated meat eventually caused sickness, and Collins tried to hide it from his customers. For example, a wastelander can be encountered in a random encounter that says to tell Longneck Lukowski he hopes he "dies in a goddamn fire" and Collins says it may have "been a bad batch."

A small can made of tin. The can is stuffed with meat from many different wasteland creatures.

Retrieved from "https://fallout.fandom.com/wiki/Potted_meat?oldid=3493373"
Community content is available under CC-BY-SA unless otherwise noted.