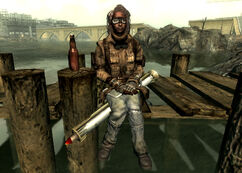 The fisherman in the endslide

The Potomac fisherman is a unique scavenger inhabiting the Capital Wasteland in 2277.

The fisherman lives near a dock just outside of the Anchorage Memorial, near the Potomac River. During the day, he or she sits out on the nearby dock and sleeps in their bed at night.

The Potomac fisherman appears only in Fallout 3.

Retrieved from "https://fallout.fandom.com/wiki/Potomac_fisherman?oldid=3274553"
Community content is available under CC-BY-SA unless otherwise noted.