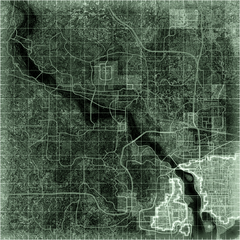 Potomac River passing through the Capital Wasteland from northwest to southeast

The Potomac River is the river that runs along most of the border of Maryland, West Virginia and Virginia. It is a waterway in eastern Appalachia and across the Capital Wasteland.

Born somewhere in the Allegheny Mountains, where the North Branch Potomac River and South Branch Potomac tributaries meet, the Potomac courses along the border of the states of Maryland and West Virginia, and later Virginia, eventually reaching the Capital Wasteland and the ruins of Washington, D.C.. It continues south, going through Point Lookout, until it finally reaches the Atlantic Ocean through Chesapeake Bay.

The Potomac River is found on the eastern reaches of Appalachia, dividing the Mire into two areas. The Crevasse Dam has created a sizeable lake in front of the Thunder Mountain power plant. To the south, the river has flooded the areas around Haven Church and the The Retreat. In Harpers Ferry, the Shenandoah River merges with the Potomac, which continues to the southeast, outside of the Appalachian territory.

Jameson Grillo and Aaron Bradie left a message on the Shelters Claim Center terminal that they were having trouble finding food and planned on following the Potomac south toward warmer climate.[1]

Its course is generally northwest to southeast and essentially divides the Capital Wasteland in half. Many portions of the river have dried up all the way to the river bed. To the north and east of the river is Maryland, to the south and west is Virginia, and all of Washington, D.C. is on the east side. It empties into the Tidal Basin along with the Anacostia River. Its waters are moderately radioactive, making swimming a somewhat hazardous method of crossing depending on the width of the section attempted. It is best to find an intact bridge or narrow or dried up section. Swimming down the river allows the player character to reach late game areas relatively safely. It is possible to bypass a number of main quests by swimming the river to the Jefferson Memorial.

There are a few boats in the river both above the surface and resting on the bed of the river, these boats sometimes contain ammunition and first aid boxes. Mirelurks are often found in and around it, with mirelurk hunters and mirelurk kings found at higher levels. The murky waters of the river make noticing mirelurks difficult in certain cases, as they can blend into the surrounding rock formations.

In the Broken Steel add-on, the Tidal Basin in front of the Jefferson Memorial is pure and drinkable thanks to the activation of Project Purity. The Potomac River remains irradiated, as the Basin has been dammed off and the purifier was never intended to affect the river itself.

The Potomac River appears in Fallout 3 and Fallout 76.

The Tidal Basin may remain irradiated in Broken Steel, as the script may not fire correctly.[verified]

The Potomac River at Harpers Ferry