Potomac Attire is one of the shops located in the Market of Rivet City. Run by Bannon, Potomac Attire sells armor and clothing, and usually has around 300 caps to barter with.

It consists of several mannequins in varying degrees of damage, along with shelves displaying Bannon's merchandise.

The Potomac Attire appears only in Fallout 3. 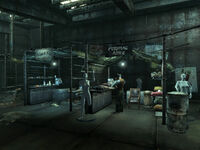