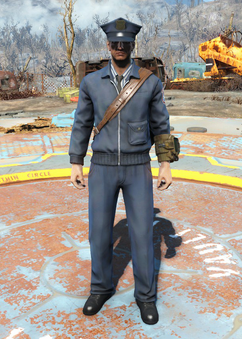 The postman uniform consists of blue pants and a blue long-sleeved jacket worn over a button up white and blue striped shirt with a black tie. It also includes black boots and a bag worn over the shoulder with U.S. Mail printed on it. The wearer's Charisma and Endurance are both increased by a single point. It cannot be worn with armor. The postman hat is a dark blue hexagon-shaped hat with a post badge adorning the front above the bill. When worn it provides a single point to Endurance.

Can be armored with ballistic weave. 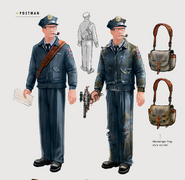 From The Art of Fallout 4
Русский Українська
Community content is available under CC-BY-SA unless otherwise noted.
Advertisement