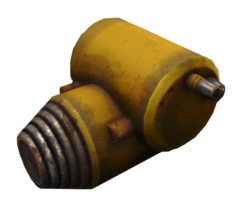 Poseidon radar transmitter is a miscellaneous item in Fallout 4.

There are 2 available locations Mr. Navigator might send the player to recover the radar transmitter:

While the Poseidon radar transmitter has material types assigned to it, it cannot be scrapped, due to it being a quest item (and it remains a quest item even after the quest has been completed).

This item can become stuck in the player's inventory if the option to Jury-Rig a fix for the Radar is chosen, as it is considered a quest item and cannot be dropped or placed into a container. This will occur even if the item is obtained after the quest has been completed, so it is advised to not pick it up if the Jury-Rig option is used. Can be removed from the inventory by using the console command player.removeitem 0009139e.

Retrieved from "https://fallout.fandom.com/wiki/Poseidon_radar_transmitter?oldid=3116609"
Community content is available under CC-BY-SA unless otherwise noted.