Poseidon Energy is a location in the Commonwealth in 2287. It was formerly a power plant, which used natural gas and solar energy, owned by the Poseidon Energy corporation.[1]

This Poseidon Energy corporation power plant uses natural gas and solar energy. Currently, a gang of raiders led by Cutty has set up defenses against the robot security active at this location, as well as encroaching mirelurks throughout the multiple levels within.

The facility's exterior is almost surrounded by catwalks patrolled by several raiders. The front and roof access doors are both Master locked. The southeast side of the facility has two drainpipes, one of which can be used to enter the Poseidon Energy sublevels.

The sublevel is partially submerged, making it a home for mirelurks, with a few automated defenses thrown in for good measure. There are two Novice-locked safes with minor loot: one through a submerged doorway near the security door terminal, and the other in an office supply closet with skeletons.

Entering from the sublevels leads right to the front door. A Novice-locked wall safe is near the "Restricted Area" sign visible from the front door. Through the yellow-lined doorway is another security terminal with a door. Opening this door will activate the main floor's automated defenses, which will start fighting the raiders on the catwalks above. Progress is pretty linear through this area with just a couple of side rooms, one of which contains a chemistry station. A short jaunt beyond the chemistry station is the ramp to the roof access door. Cutty clad in raider power armor awaits in the central structure, guarding the Endurance bobblehead and a Tesla Science magazine.

Synths have been sighted here attacking the raiders inside the building. Depending on the level, there may also be a courser. If one has a good relationship with the Institute, they will not attack.

Poseidon Energy appears only in Fallout 4.

Cutty may not be hostile towards the player character, likely due to the appearance of the synths.[verified] 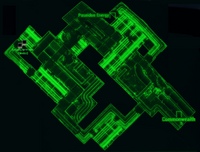