Broken Razor
“My talents are best put to use helping a new Overboss get all this shit under control. You get me?”— Porter Gage to the Sole Survivor

Porter Gage is a raider and possible companion of the Sole Survivor in 2287.

Porter Gage grew up in a small farming settlement with his parents, watching them give in to raider demands without a fight. At the age of 12, he ran away from home during a raid to avoid following in his parents' footsteps.[1]

The next few years, Gage survived by taking odd jobs, doing what he could to earn caps. Later, he turned to caravan and mercenary work and continued to observe individuals giving in to raiders. At age 16, after the raid of a settlement he had been residing and working in, Gage decided that he would no longer fear or flee from raiders and instead decided to become one. With this thought, Gage left the mercenary life behind.[2]

The first gang Gage joined was a decent size and had a lot of strength, but wasn't using it wisely. Being young and naïve, he attempted to suggest different ways the gang could be improved and streamlined. Eventually, he was approached by his the gang's leader, Connor "The Harvester," a name Gage thought was laughable. Much to Gage's surprise, Connor listened to and executed Gage's idea. After this unspecified incident, Connor would regularly return to Gage for advice and opinions on his plans, telling him how much he trusted him, which rapidly inflated Gage's ego.[3]

After approximately a year of working alongside Connor and his gang, Gage suggested that they could try to make peace with another nearby gang. Connor seemed agreeable to the idea, so Gage volunteered to be the negotiator of the situation, meeting the opposing gang on neutral ground with three of their biggest crewmates backing him up.[4]

An hour into the negotiation, the rivals began to come around, saying the truce was in their best interest. However, seemingly out of nowhere, there was gunfire and explosions. Gage began to panic, thinking that Connor would have to come and bail them out, but he soon realized that Connor had set him up for death. Connor, in Gage's mind, must have begun to fear him, thinking that he would usurp Connor's role. Connor had used Gage as a distraction so he and his men could ambush both Gage and the rival gang. Gage survived the encounter and escaped on his own.[5]

Gage debated going back to his former boss and his gang with guns blazing to get revenge, but he knew that that would lead to certain death.[6] Instead, he moved on, vowing he would never be so stupid, or so trusting, again. Gage has said that he has been in many gangs and has witnessed each one destroy itself from stupidity, laziness and chem addiction, stating that he always bolted before their end occurred.[7]

At some point, Gage's raider career eventually led him to the outskirts of the Commonwealth, where he became involved with a veteran raider named Colter. On Gage's advice, Colter gathered and led three gangs (the Operators, the Disciples and the Pack) to storm Nuka-World, enslaving, killing and driving out the settlers who had taken residence there, an event known as "Fall of Nuka-Town USA".[8]

Afterward, Gage continued to serve as an advisor and right-hand man to Colter, who had been dubbed Nuka-World's "Overboss." However, Gage and the gangs soon became dissatisfied with their leader's complacency and incompetence and began plotting to replace him. Their chance came when the Sole Survivor made their way through the Gauntlet.[9]

Porter Gage appears only in the Fallout 4 add-on Nuka-World.

Gage preparing Colter to speak at the arena 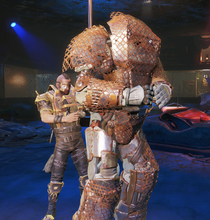 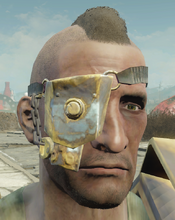